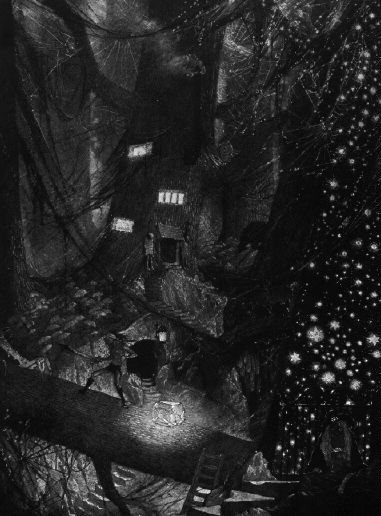 When Thangobrind the jeweller heard the ominous cough, he turned at once upon that narrow way. A thief was he, of very high repute, being patronized by the lofty and elect, for he stole nothing smaller than the Moomoo's egg, and in all his life stole only four kinds of stone -- the ruby, the diamond, the emerald, and the sapphire; and, as jewellers go, his honesty was great. Now there was a Merchant Prince who had come to Thangobrind and had offered his daughter's soul for the diamond that is larger than the human head and was to be found on the lap of the spider-idol, Hlo-hlo, in his temple of Moung-ga-ling; for he had heard that Thangobrind was a thief to be trusted.

Thangobrind oiled his body and slipped out of his shop, and went secretly through byways, and got as far as Snarp, before anyone knew that he was out on business again or missed his sword from its place under the counter. Thence he moved only by night, hiding by day and rubbing the edges of his sword, which he called Mouse because it was swift and nimble. The jeweller had subtle methods of travelling; nobody saw him cross the plains of Zid; nobody saw him come to Mursk or Tlun. O, but he loved shadows! Once the moon peeping out unexpectedly from a tempest had betrayed an ordinary jeweller; not so did it undo Thangobrind: the watchman only saw a crouching shape that snarled and laughed: "'Tis but a hyena," they said. Once in the city of Ag one of the guardians seized him, but Thangobrind was oiled and slipped from his hand; you scarcely heard his bare feet patter away. He knew that the Merchant Prince awaited his return, his little eyes open all night and glittering with greed; he knew how his daughter lay chained up and screaming night and day. Ah, Thangobrind knew. And had he not been out on business he had almost allowed himself one or two little laughs. But business was business, and the diamond that he sought still lay on the lap of Hlo-hlo, where it had been for the last two million years since Hlo-hlo created the world and gave unto it all things except that precious stone called Dead Man's Diamond. The jewel was often stolen, but it had a knack of coming back again to the lap of Hlo-hlo. Thangobrind knew this, but he was no common jeweller and hoped to outwit Hlo-hlo, perceiving not the trend of ambition and lust and that they are vanity.

How nimbly he threaded his way through the pits of Snood! -- now like a botanist, scrutinising the ground; now like a dancer, leaping from crumbling edges. It was quite dark when he went by the towers of Tor, where archers shoot ivory arrows at strangers lest any foreigner should alter their laws, which are bad, but not to be altered by mere aliens. At night they shoot by the sound of the strangers' feet. O, Thangobrind, Thangobrind, was ever a jeweller like you! He dragged two stones behind him by long cords, and at these the archers shot. Tempting indeed was the snare that they set in Woth, the emeralds loose-set in the city's gate; but Thangobrind discerned the golden cord that climbed the wall from each and the weights that would topple upon him if he touched one, and so he left them, though he left them weeping, and at last came to Theth. There all men worship Hlo-hlo; though they are willing to believe in other gods, as missionaries attest, but only as creatures of the chase for the hunting of Hlo-hlo, who wears Their halos, so these people say, on golden hooks along his hunting-belt. And from Theth he came to the city of Moung and the temple of Moung-ga-ling, and entered and saw the spider-idol, Hlo-hlo, sitting there with Dead Man's Diamond glittering on his lap, and looking for all the world like a full moon, but a full moon seen by lunatic who had slept too long in its rays, for there was in Dead Man's Diamond a certain sinister look and a boding of things to happen that are better not mentioned here. The face of the spider-idol was lit by that fatal gem; there was no other light. In spite of his shocking limbs and that demoniac body, his face was serene and apparently unconscious.

A little fear came into the mind of Thangobrind the jeweller, a passing tremor -- no more; business was business and he hoped for the best. Thangobrind offered honey to Hlo-hlo and prostrated himself before him. Oh, he was cunning! When the priests stole out of the darkness to lap up the honey they were stretched senseless on the temple floor, for there was a drug in the honey that was offered to Hlo-hlo. And Thangobrind the jeweller picked Dead Man's Diamond up and put it on his shoulder and trudged away from the shrine; and Hlo-hlo the spider-idol said nothing at all, but he laughed softly as the jeweller shut the door. When the priests awoke out of the grip of the drug that was offered with the honey to Hlo-hlo, they rushed to a little secret room with an outlet on the stars and cast a horoscope of the thief. Something that they saw in the horoscope seemed to satisfy the priests.

It was not like Thangobrind to go back by the road by which he had come. No, he went by another road, even though it led to the narrow way, night-house and spider-forest.

The city of Moung went towering by behind him, balcony above balcony, eclipsing half the stars, as he trudged away with his diamond. He was not easy as he trudged away. Though when a soft pittering as of velvet feet arose behind him he refused to acknowledge that it might be what he feared, yet the instincts of his trade told him that it is not well when any noise whatever follows a diamond by night, and this was one of the largest that had ever come to him in the way of business. When he came to the narrow way that leads to spider-forest, Dead Man's Diamond feeling cold and heavy, and the velvety footfall seeming fearfully close, the jeweller stopped and almost hesitated. He looked behind him; there was nothing there. he listened attentively; there was no sound now. Then he thought of the screams of the Merchant Prince's daughter, whose soul was the diamond's price, and smiled and went stoutly on. There watched him, apathetically, over the narrow way, that grim and dubious woman whose house is the Night. Thangobrind, hearing no longer the sound of suspicious feet, felt easier now. He was all but come to the end of the narrow way, when the woman listlessly uttered that ominous cough.

The cough was too full of meaning to be disregarded. Thangobrind turned round and saw at once what he feared. The spider-idol had not stayed at home. The jeweller put his diamond gently upon the ground and drew his sword called Mouse. And then began that famous fight upon the narrow way in which the grim old woman whose house was Night seemed to take so little interest. To the spider-idol you saw at once it was all a horrible joke. To the jeweller it was grim earnest. He fought and panted and was pushed back slowly along the narrow way, but he wounded Hlo-hlo all the while with terrible long gashes all over his deep, soft body till Mouse was slimy with blood. But at last the persistent laughter of Hlo-hlo was too much for the jeweller's nerves, and, once more wounding his demoniac foe, he sank aghast and exhausted by the door of the house called Night at the feet of the grim old woman, who having uttered once that ominous cough interfered no further with the course of events. And there carried Thangobrind the jeweller away those whose duty it was, to the house where the two men hang, and taking down from his hook the left-hand one of the two, they put that venturous jeweller in his place; so that there fell on him the doom that he feared, as all men know though it is so long since, and there abated somewhat the ire of the envious gods.

And the only daughter of the Merchant Prince felt so little gratitude for this great deliverance that she took to respectability of a militant kind, and became aggressively dull, and called her home the English Riviera, and had platitudes worked in worsted upon her tea-cosy, and in the end never died, but passed away at her residence.