The Hoard of the Gibbelins 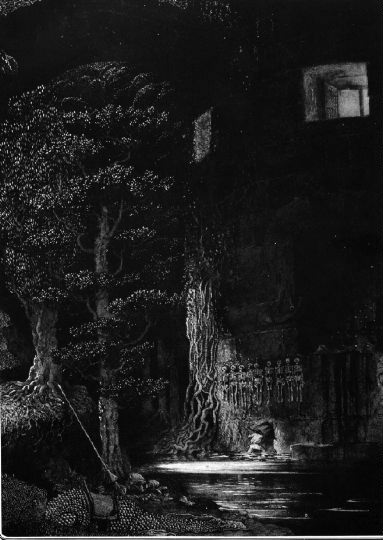 The Gibbelins eat, as is well known, nothing less good than man. Their evil tower is joined to Terra Cognita, to the lands we know, by a bridge. Their hoard is beyond reason; avarice has no use for it; they have a separate cellar for emeralds and a separate cellar for sapphires; they have filled a hole with gold and dig it up when they need it. And the only use that is known for their ridiculous wealth is to attract to their larder a continual supply of food. In times of famine they have even been known to scatter rubies abroad, a little trail of them to some city of Man, and sure enough their larders would soon be full again.

Their tower stands on the other side of that river known to Homer — ho rhoos okeanoio, as he called it — which surrounds the world. And where the river is narrow and fordable the tower was built by the Gibbelins' gluttonous sires, for they liked to see burglars rowing easily to their steps. Some nourishment that common soil has not the huge trees drained there with their colossal roots from both banks of the river.

Alderic, Knight of the Order of the City and the Assault, hereditary Guardian of the King's Peace of Mind, a man not unremembered among makers of myth, pondered so long upon the Gibbelins' hoard that by now he deemed it his. Alas that I should say of so perilous a venture, undertaken at dead of night by a valourous man, that its motive was sheer avarice! Yet upon avarice only the Gibbelins relied to keep their larders full, and once in every hundred years sent spies into the cities of men to see how avarice did, and always the spies returned again to the tower saying that all was well.

It may be thought that, as the years went on and men came by fearful ends on that tower's wall, fewer and fewer would come to the Gibbelins' table: but the Gibbelins found otherwise.

Not in the folly and frivolity of his youth did Alderic come to the tower, but he studied carefully for several years the manner in which burglars met their doom when they went in search of the treasure that he considered his. In every case they had entered by the door.

He consulted those who gave advice on this quest; he noted every detail and cheerfully paid their fees, and determined to do nothing that they advised, for what were their clients now? No more than examples of the savoury art, and mere half-forgotten memories of a meal; and many, perhaps, no longer even that.

These were the requisites for the quest that these men used to advise: a horse, a boat, mail armour, and at least three men-at-arms. Some said, "Blow the horn at the tower door"; others said, "Do not touch it."

Alderic thus decided: he would take no horse down to the river's edge, he would not row along it in a boat, and he would go alone and by way of the Forest Unpassable.

How pass, you may say, the unpassable? This was his plan: there was a dragon he knew of who if peasants' prayers are heeded deserved to die, not alone because of the number of maidens he cruelly slew, but because he was bad for the crops; he ravaged the very land and was the bane of a dukedom.

Now Alderic determined to go up against him. So he took horse and spear and pricked till he met the dragon, and the dragon came out against him breathing bitter smoke. And to him Alderic shouted, "Hath foul dragon ever slain true knight?" And well the dragon knew that this had never been, and he hung his head and was silent, for he was glutted with blood. "Then," said the knight, "if thou would'st ever taste maiden's blood again thou shalt be my trusty steed, and if not, by this spear there shall befall thee all that the troubadours tell of the dooms of thy breed."

And the dragon did not open his ravening mouth, nor rush upon the knight, breathing out fire; for well he knew the fate of those that did these things, but he consented to the terms imposed, and swore to the knight to become his trusty steed.

It was on a saddle upon this dragon's back that Alderic afterwards sailed above the unpassable forest, even above the tops of those measureless trees, children of wonder. But first he pondered that subtle plan of his which was more profound than merely to avoid all that had been done before; and he commanded a blacksmith, and the blacksmith made him a pickaxe.

Now there was great rejoicing at the rumour of Alderic's quest, for all folk knew that he was a cautious man, and they deemed that he would succeed and enrich the world, and they rubbed their hands in the cities at the thought of largesse; and there was joy amoung all men in Alderic's country, except perchance among the lenders of money, who feared they would soon be paid. And there was rejoicing also because men hoped that when the Gibbelins were robbed of their hoard, they would shatter their high-built bridge and break the golden chains that bound them to the world, and drift back, they and their tower, to the moon, from which they had come and to which they rightly belonged. There was little love for the Gibbelins, though all men envied their hoard.

When they heard that he had rejected the advice of those that gave it, some said that the knight was mad, and others said he was greater than those what gave the advice, but none appreciated the worth of his plan.

He reasoned thus: for centuries men had been well advised and had gone by the cleverest way, while the Gibbelins came to expect them to come by boat and to look for them at the door whenever their larder was empty, even as a man looketh for a snipe in a marsh; but how, said Alderic, if a snipe should sit in the top of a tree, and would men find him there? Assuredly never! So Alderic decided to swim the river and not to go by the door, but to pick his way into the tower through the stone. Moreover, it was in his mind to work below the level of the ocean, the river (as Homer knew) that girdles the world, so that as soon as he made a hole in the wall the water should pour in, confounding the Gibbelins, and flooding the cellars, rumoured to be twenty feet in depth, and therein he would dive for emeralds as a diver dives for pearls.

And on the day that I tell of he galloped away from his home scattering largesse of gold, as I have said, and passed through many kingdoms, the dragon snapping at maidens as he went, but being unable to eat them because of the bit in his mouth, and earning no gentler reward than a spurthrust where he was softest. And so they came to the swart arboreal precipice of the unpassable forest. The dragon rose at it with a rattle of wings. Many a farmer near the edge of the worlds saw him up there where yet the twilight lingered, a faint, black, wavering line; and mistaking him for a row of geese going inland from the ocean, went into their houses cheerily rubbing their hands and saying that winter was coming, and that we should soon have snow. Soon even there the twilight faded away, and when they descended at the edge of the world it was night and the moon was shining. Ocean, the ancient river, narrow and shallow there, flowed by and made no murmur. Whether the Gibbelins banqueted or whether they watched by the door, they also made no murmur. And Alderic dismounted and took his armour off, and saying one prayer to his lady, swam with his pickaxe. He did not part from his sword, for fear that he meet with a Gibbelin. Landed the other side, he began to work at once, and all went well with him. Nothing put out its head from any window, and all were lighted so that nothing within could see him in the dark. The blows of his pickaxe were dulled in the deep walls. All night he worked, no sound came to molest him, and at dawn the last rock swerved and tumbled inwards, and the river poured in after.

Then Alderic took a stone, and went to the bottom step, and hurled the stone at the door; he heard the echoes roll into the tower, then he ran back and dived through the hole in the wall.

He was in the emerald-cellar. There was no light in the lofty vault above him, but, diving through twenty feet of water, he felt the floor all rough with emeralds, and open coffers full of them. By a faint ray of the moon he saw that the water was green with them, and easily filling a satchel, he rose again to the surface; and there were the Gibbelins waist-deep in the water, with torches in their hands! And, without saying a word, or even smiling, they neatly hanged him on the outer wall and the tale is one of those that have not a happy ending.